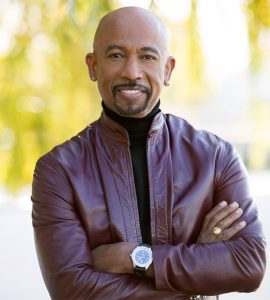 Montel Williams earned his media celebrity status as an inspirational Emmy Award winning television personality whom Americans invited into their homes for more than 17 years. He is a decorated former naval officer, inspirational speaker, author, entrepreneur, advocate for patients worldwide and a passionate snowboarder.

Before and after the success of his television show, Montel has incubated projects that he has transformed into major initiatives, all with the goal of helping others. Williams is currently hosting the Lifetime Show, Military Makeover with Montel. This unique series enlists designers, contractors, landscapers and other home improvement professionals to transform the homes and lives of
military families across the country. He also recently signed on as host of the Lifetime talk show, The Balancing Act, now in its 13th year.

Williams launched his debut podcast project, Let’s Be Blunt with Montel, in August of 2020. The goal of the podcast is to empower listeners with knowledge on a wide variety of topics that can impact their lives and well being, with a recurring theme of covering the cannabis space.
A
fter having been “arrested” on cannabis charges while traveling through an airport, he became an early advocate of medical cannabis and cannabis reform generally. At a time where patients were being dragged out of their homes in wheelchairs by the police for using cannabis to treat serious med-
ical conditions like cancer and MS. Williams was one of the few high-profile voices on Capitol Hill fighting for patients. Over the past two decades,he has worked to pass cannabis legislation in key states and helped lead the push for military veterans to access medical cannabis without the threat of losing benefits.

Host and his show was nominated for Outstanding Talk Show two years in a row. Williams enjoys acting and performs whenever his schedule permits, most recently having guest starred on the Fox hit series The Resident. Over the years he has appeared on programs including “All My Children.” “American Dreams” and “JAG.” Williams contributed to the long running dramatic series “Guiding Light” playing “Clayton Boudreau”, which landed him a nomination in 2009 for a NAACP Image Award for Outstanding Actor in a Television Series. He also starred in the critically acclaimed off-Broadway play “The Exonerated”. Williams starred and executive produced a prime-time network series for CBS, “The Education of Matt Waters”. Williams is a prolific author of uplifting and practical books, four of which became bestsellers. They include “Living Well Emotionally: Breakthrough to a Life of Happiness”,” Living Well: 21 Days to Transform Your Life, Supercharge Your Health, and Feel Spectacular”, “ Climbing Higher”,” Body Change”,” Life Lessons and Reflections”, “A Dozen Ways to Sunday: Stories of Hope and Courage”, ”Mountain Get Out of My Way: Life Lessons and Learned Truths” and “Practical Parenting”.

Because of Williams’ own military service, he is passionate about the well being of active duty military and veterans. Over the years he has been involved in charities promoting diversity, the welfare of children, animal rights as well as the well-being of active duty troops and veterans. Williams currently serves as a board member of the Fisher House Foundation and on advisory board for the Ann Romney Center for Neurologic Diseases at Brigham and Women’s Hospital.
Williams began his professional career in the United States Marine Corp and was the first black Marine selected to the Naval Academy Prep School to then go on to graduate from the United States Naval Academy and be com missioned a Naval Officer. Williams earned a degree in general engineering and a minor in international security affairs. He also earned a degree from the Defense Language Institute in Russian and Mandarin Chinese. While serving in the military Williams was the recipient of two Meritorious Service Medals, two Navy Commendation Medals, two Navy Achievement Medals
and various other military awards and citations.