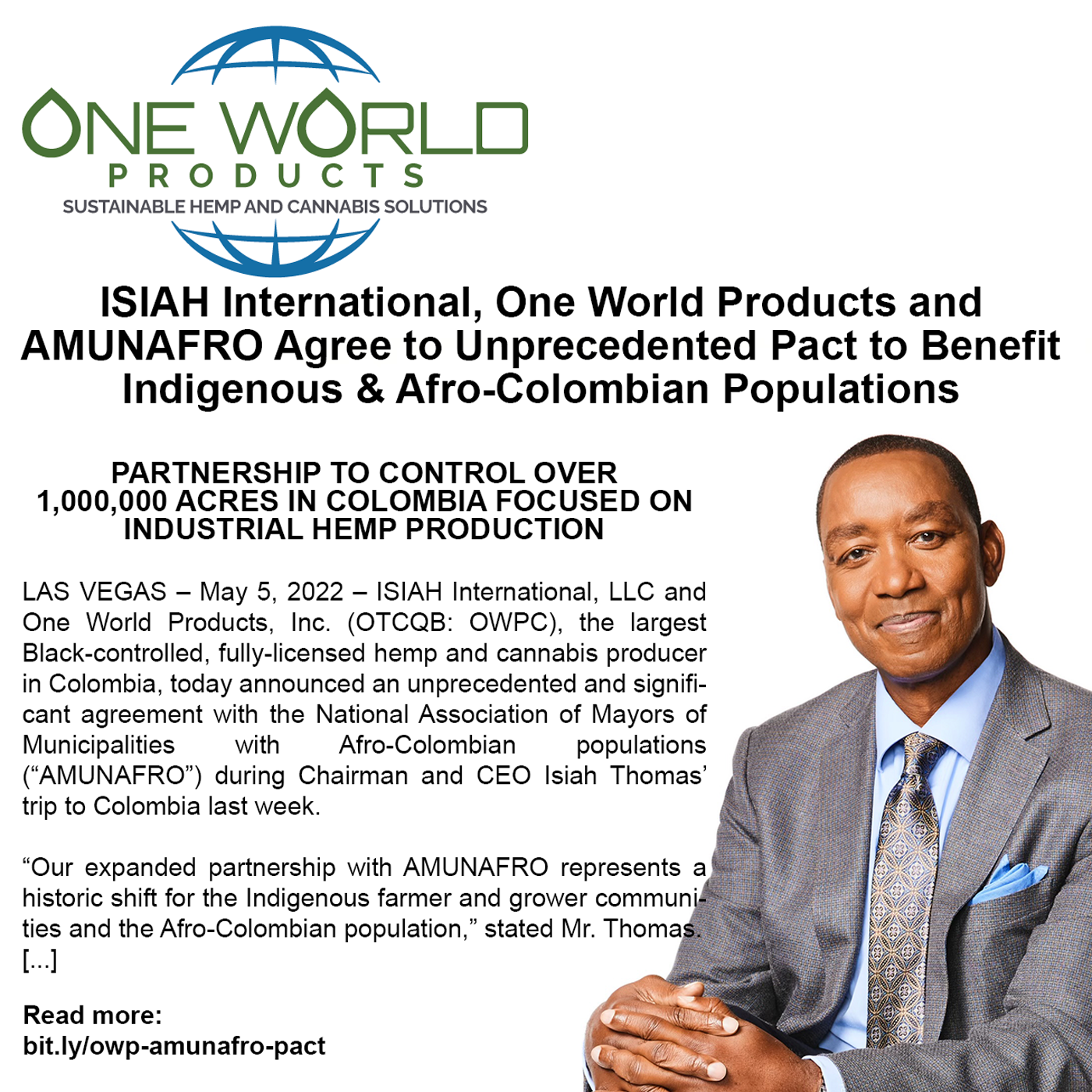 Partnership to control over 1,000,000 acres in Colombia  focused on Industrial Hemp Production

LAS VEGAS – May 5, 2022 – ISIAH International, LLC and One World Products, Inc. (OTCQB: OWPC), the largest Black-controlled, fully-licensed hemp and cannabis producer in Colombia, today announced an unprecedented and significant agreement with the National Association of Mayors of Municipalities with Afro-Colombian populations (“AMUNAFRO”) during Chairman and CEO Isiah Thomas’ trip to Colombia last week.

“Our expanded partnership with AMUNAFRO represents a historic shift for the Indigenous farmer and grower communities and the Afro-Colombian population,” stated Mr. Thomas. “As an ascendant international hemp and cannabis company focused on environmental, social, and governance (ESG) standards, our consortium will now control over ONE MILLION ACRES of land in Colombia focused on the licensed production of industrial hemp for integration into sustainable, carbon-reducing products made throughout the world. And with this control over one million-plus acres dedicated to eco-enriching hemp production, we estimate that we will capture more carbon than the Amazon Rainforest will capture in comparable decades to come.

“Another benefit of the partnership is that we now may be the largest black-owned land organization in the Americas,” added Mr. Thomas. “As I have said previously, a primary goal of our partnership has been to serve the Indigenous and Afro-Colombian communities through the formation of a business consortium of small and emerging business entities with an interest in the cultivation of industrial hemp. This agreement for control of over one million acres of land in Colombia is a ‘game-changer’ for improving the global environment as well as the lives of Indigenous people and Afro-Colombians for future generations.” 2

Mr. Thomas made additional comments regarding his visit, “We met with many important business leaders and government officials on our trip who all share the same desire – a more healthy and prosperous life for all Colombians. As an example, we had a fantastic meeting with Dow Chemical’s Colombian Team to discuss strategies for global carbon reduction, the future of recyclable plastics using hemp resins and job creation in Colombia.

“In closing, I would like to thank all those that planned, supported and managed our logistics in Colombia. We look forward to returning soon to continue our discussions with those we met on this trip, as well as begin new dialogues and conversations with additional Colombian leaders as we begin executing on expanded production plans with our Indigenous and Afro-Colombian partners.”

Isiah Thomas was inducted into the National Basketball Association (NBA) Hall of Fame in 2000 after spending his entire career with the Detroit Pistons. He was a 12-time NBA All-Star, a two-time NBA champion, the 1990 NBA Finals Most Valuable Player, and named as one of the 50 Greatest Players in NBA History. Today, Mr. Thomas serves as an analyst for NBA TV and is an accomplished and highly respected international business executive and investor. His portfolio of companies was developed through ISIAH International, Inc., which invests in companies with strong market positions and growth potential.

Mr. Thomas’ business interests include sports and entertainment, real estate, waste management, hemp, cannabis, and a CBD personal products company, among others. In addition, Mr. Thomas has developed a very successful champagne business, Cheurlin Champagnes. He has cultivated excellent relationships with the grower, employees, and the French government. As a result, he now owns the proprietary genetics for the Champagne grapes he produces and has perfected an international import/export system for the global distribution of the product. More information is available at www.isiahinternational.com.

Mr. Thomas previously served on the Chicago Stock Exchange’s Board of Governors, was a co-founder of the NBA’s Toronto Raptors, Popcorn Indiana, and was a member of the Board of Get-in Chicago, an organization that focused on preventing gang violence in Chicago. He is a Distinguished Alumnus of Indiana University, where he earned his Bachelor of Arts in Criminal Justice. He also received his Master of Education from the University of California at Berkeley. 3

About One World Products, Inc.

One World Products is the largest Black-controlled, fully licensed hemp and cannabis producer with offices in Las Vegas, Nevada, and offices and operations in Bogota and Popayan, Colombia. One World Products planted its first crop of cannabis in 2018 at its cultivation site in Popayan, Colombia, and began harvesting commercially in the first quarter of 2020. The Company expects to supply its global clients with the highest quality industrial and commercial applications for cannabis, hemp, and hemp products, including derivatives in crude oil, distillate, and isolate forms with industrial-scale production to serve global cannabis and hemp demand. Its products will be produced and tested according to GAP, GMP and ISO standards.

One World Products was recently selected by Stellantis N.V., one of the world’s largest automotive manufacturers with brands such as Chrysler, Dodge, Fiat, Maserati, and Peugeot – to develop and supply hemp-based bioplastic solutions for interior and exterior components.

As its name suggests, One World also focuses on environmental, social, and governance (ESG) standards. Emphasizing its impact on the environment and ensuring that its employees, particularly those within its Colombia operations, are valued and recognized for their contributions, while maintaining stewardship over their indigenous land. For more information, please visit https://oneworldproducts.com/.